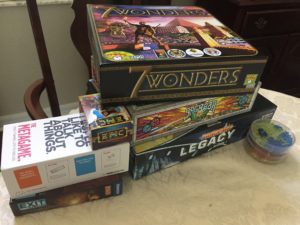 I know what the next episode will be, one on problem solving. Then, either Episode 09 or Episode 10 will have a special guest it looks like. We are still working out the details.

Thanks for being on this ride with me! I hope you are enjoying it!

I am Dr. Stephen Blessing, and I have a podcast about the intersection of psychology and gaming. Search for 'Cognitive Gamer' where you listen to podcasts!

New episode! Ever consider what makes learning or teaching rules easy or hard? Viewed a @WatchItPlayed and wondered why it's so effective? Give a listen to the new podcast! Special thanks to @belltowergames for the topic! https://bit.ly/cogep33

After a bit of an absence (sorry!), a new episode! I use @luckyduckgames Paranormal Detectives to talk about bottom-up (aka "data-driven") v. top-down (aka "knoweldge-driven") processing! Give it a listen! http://bit.ly/cogep32

Playing our Rescue Riders retheme of Inacan gold and reminded of this ludology episode with @cognitive_gamer and @gengelstein in which they discuss how theme can change play but effect washes out over time. http://ludology.libsyn.com/gametek-2135-the-incan-gold-experiment

With my love of puzzles, this is way cool!
https://www.seattletimes.com/nation-world/mars-rovers-giant-parachute-carried-secret-message/

First game with the new Azul upgrade, acrylic templates by @BoardGameBoost. Very nice! And, I won!